It seems counter-intuitive but the more baby sleeps, the more he will sleep. Sleep begets sleep. The biggest mistake parents make when it comes to sleep for their babies is underestimating how much they actually need. Starting the day off right is your biggest asset, and that means starting with the first nap. 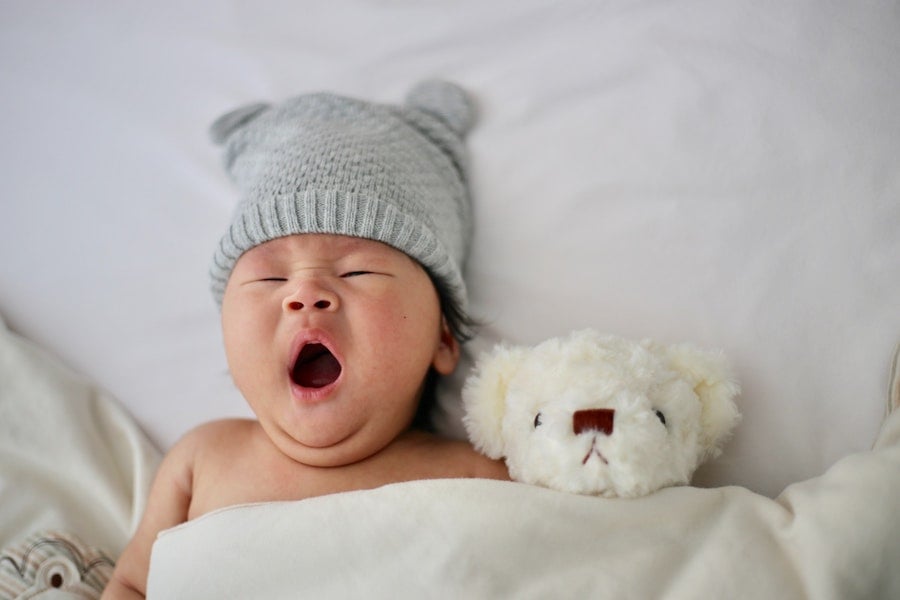 Baby needs his first nap within one to two hours of waking up. The optimal time to put baby to sleep is before he starts acting tired.

We often think of cues like rubbing eyes and fussing as signaling tiredness, but those are actually signs of being over-tired.

The sleepy cues you want to look for are when baby starts to get quiet and slower. Eyes may drift, he’s less engaged, he yawns and his activity level has decreased.

If you can get baby to bed when this starts happening, he’ll drift off really easily. Babies struggle more when they’re over-tired. Their brains get wired and it’s harder for them to calm down and soothe to sleep.

Understanding ideal nap times and wake windows by age can help baby get better sleep. Following the right wake windows is the key to preventing an overtired baby!

If you’re feeling worried about each new time period in baby’s life, be sure to sign up for the Sleep Series emails! I send timely tips before they even happen so you’re prepared for every step of baby’ sleep journey. Sign up here!

Now let’s check out some different wake windows for certain ages. Here is a quick chart for reference!

If you haven’t already, download my FREE newborn sleep guide. It’ll give you a good rundown on establishing good sleep for your newborn that you can print and keep with you! Download for free here 💤

Between 4-9 months, baby needs 3 naps per day. (Don’t forget, that early awakening around 5 am is NOT baby’s time to wake up. It’s super normal for baby to have a wakeful period then, but just feed him and put him back to bed.)

This schedule should be your ideal wake windows for your 4-9 month old (sometimes 8 months old). 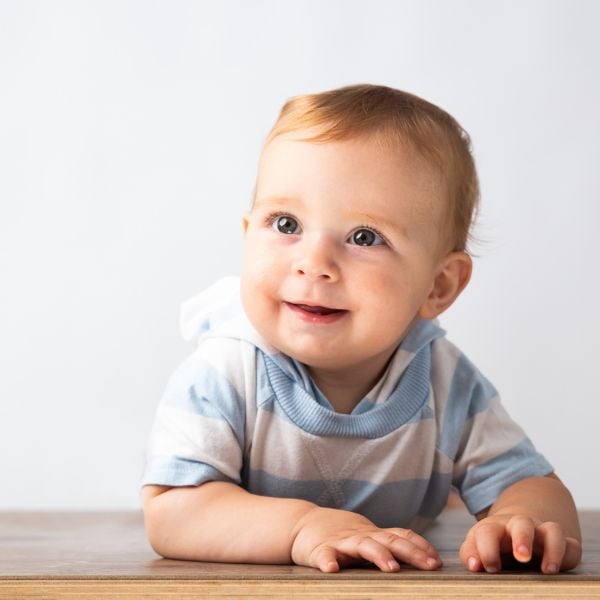 Baby will hold on to 2 naps a day until about 16 months old, when he’ll drop the morning nap. You may have to shift nap time again, and move the single nap to 12 or 1:00. 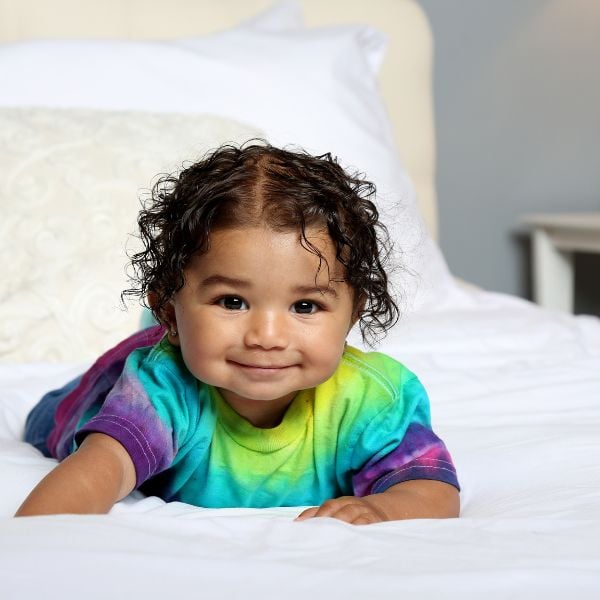 As a general rule, a nap that lasts less than 45 minutes is not enough unless it’s the third nap of the day.

Sometimes babies stir at the half-way point in their nap, so make it a general rule to leave baby in his crib for a few minutes if he wakes up after less than 45 minutes.

He’ll learn to put himself back to sleep and eventually stop waking up at that 45 minute mark. If baby wakes up crying, that’s generally a sign that he’s not done sleeping.

Baby should wake up in a good mood, coo-ing and playing happily in his crib. 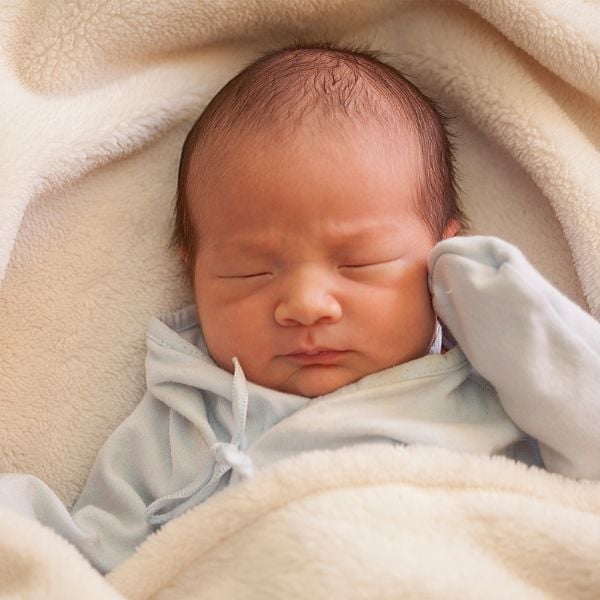 Try your best not to mess with sleep times, especially in the first few months. Don’t keep baby up later than you know he needs to be, or rely too much on baby getting his nap in the car.

Don’t count on baby being flexible with naps until about 12 months to 14 months (again, every baby is different). At that time, when his sleep has been predictable he can handle going down an hour later, on occasion.

Sometimes if you mess with your sleep window you miss it.  He may make up a little of the time, but he probably won’t make up for all of it. Or he does get a full length nap but the subsequent naps and bedtime get thrown off. Not worth it.

Bedtime should be early.

Shoot for 6:00 pm-7:00 pm. My girls had a 6:00 bedtime until they were 9-12 months old. I know, it sounds so early. But an extra bonus is that you have a whole evening to spend with your spouse and keep your relationship alive.

Plus, you have plenty of time to relax, do self-care and get caught up on other chores. It’s hard if you work and baby has to go to bed as soon as you get home.

But his sleep is so important. He needs his sleep. (I know… he needs his mama too.) See if you can arrange an earlier work schedule with your boss. Maybe you can go in at 7:00 am or 8:00 am and come home earlier.

The other wrench that gets thrown in here is the weekend and your social life. 6:00 pm is awfully early to turn in on a Saturday night. 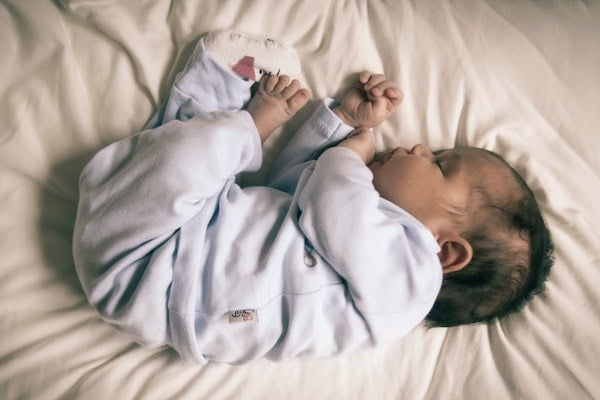 The key to preventing an overtired baby is to keep up with your baby’s wake windows! Here are general baby wake windows by age.

If nap times are a struggle, I have a crap nap guide that will help save the day.

I also have a guide that goes over the various sleep regression stages and how to overcome them when they come.

Sleep regressions are tough, and they often mean it’s time to shift your baby’s wake windows. Learn how to overcome the 6-week sleep regression here!

Sleepy cues are one of the best ways to make sure you’re judging wake windows correctly. Learn all about baby sleep cues here!

Get age-based sleep tips straight to your inbox for free!